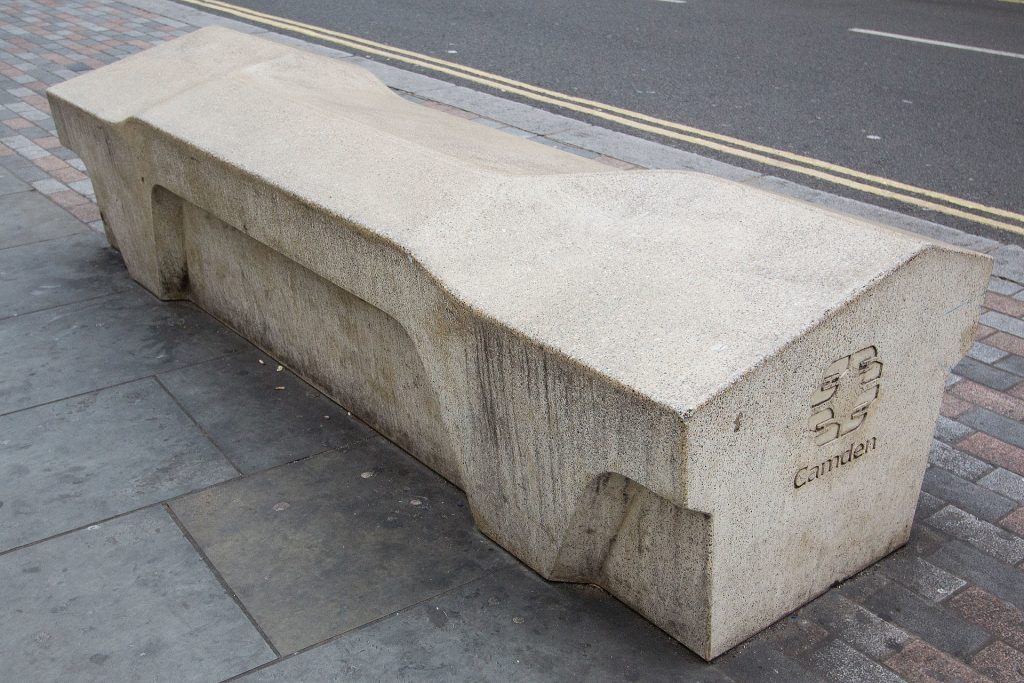 A recent episode of the brilliant podcast 99% Invisible by Roman Mars covered the controversial topic of unpleasant design and hostile urban architecture:

Unpleasant designs take many shapes, but they share a common goal of exerting some kind of social control in public or in publicly-accessible private spaces. They are intended to target, frustrate and deter people, particularly those who fall within unwanted demographics.

A number of such strategies are aimed loitering teens, and many of these are less physical or obvious than an uncomfortable bench. Some businesses play classical music as a deterrent, on the theory that kids don’t want to hang out or talk over it. Other sound-based strategies include the use of high-frequency sonic buzz generatorsmeant to be audible only to young people. Housing estates in the UK have also put up pink lighting, aimed to highlight teenage blemishes. In many cases, there is little data to show how well these more unconventional strategies actually work.

One example mentioned in the episode is the Camden bench, a piece of street furniture I’ve encountered many times in that part of London, but not that much thought to until now. Frank Swain notes in an article on Medium has a great overview:

This pale, amorphous lump of sculpted concrete is designed to resist almost everything in a city that it might come into contact with. Named for the London authority that commissioned it, the Camden Bench has a special coating which makes it impervious to graffiti and vandalism. The squat, featureless surface gives drug dealers nowhere to hide their secret caches. The angled sides repel skateboarders and flyposters, litter and rain. The cambered top throws off rough sleepers. In fact, it is specially crafted to make sure that it is not used as anything except a bench. This makes it a strange artifact, defined far more by what it is not than what it is. The Camden Bench is a concerted effort to create a non-object.

It’s a fascinating topic. Check out the blog – and book – Unpleasant Design to learn more.