Sorry seems to be the hardest word

Sorry seems to be the hardest word – or so the song goes. And certainly many brands have found it hard to apologise when things go pear-shaped.

Pepsi illustrated this when their tone-deaf appropriation of Black Lives Matter protests caused a minor uproar.

Rather than issue a simple and sincere expression of regret, Pepsi seemed more concerned about protecting the campaign’s star, Kendall Jenner, to whom they apologised for putting “in this position.”

All too often brands adopt the passive voice when responding to criticism. “Mistakes were made,” they say. “Attempts should have been made to rectify matters,” they add.

These dry ‘sorry, not sorry’ statements straight from corporate legal departments no longer pass muster in the age of social media when we can all directly demand answers.

But the brands that have cottoned on to the fact are reaping the rewards.

When KFC inexplicably ran out of chicken across their chain of 900 UK restaurants last year they ran full page newspaper ads with knowing copy that began with the lines “A chicken restaurant without any chicken. It’s not ideal.”

Above the text sat a familiar image of a KFC bucket, but with the letters rearranged to spell ‘FCK.’

A well crafted apology can even convert critics into advocates.

When the Coca-Cola Company replaced their iconic sugary beverage with New Coke in the 1980s they a faced huge consumer backlash. After a swift u-turn Classic Coke returned to the shelves and a sales spike followed.

Carlsberg are currently running a bold campaign that finally acknowledges that their beer is probably not the best in the world, after all – something that had become all too apparent in the midst of a craft ale revolution.

This came to light when the official Carlsberg Twitter account unexpectedly started retweeting customer criticism. It turns out this was a clever way to draw attention to a relaunch with a new recipe, which the Danish brewing giant no doubt hopes goes better than New Coke.

“If you are making an apology, you have to mean it,” according to Chris Gilmour of Beattie Communications. “And show that it’s having an impact.” 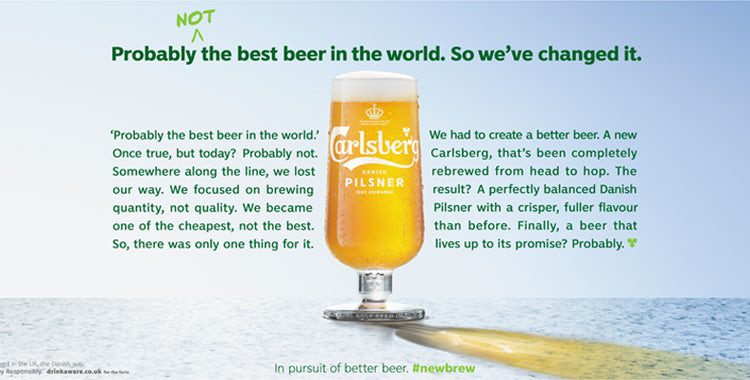