The Genius of Patek Philippe 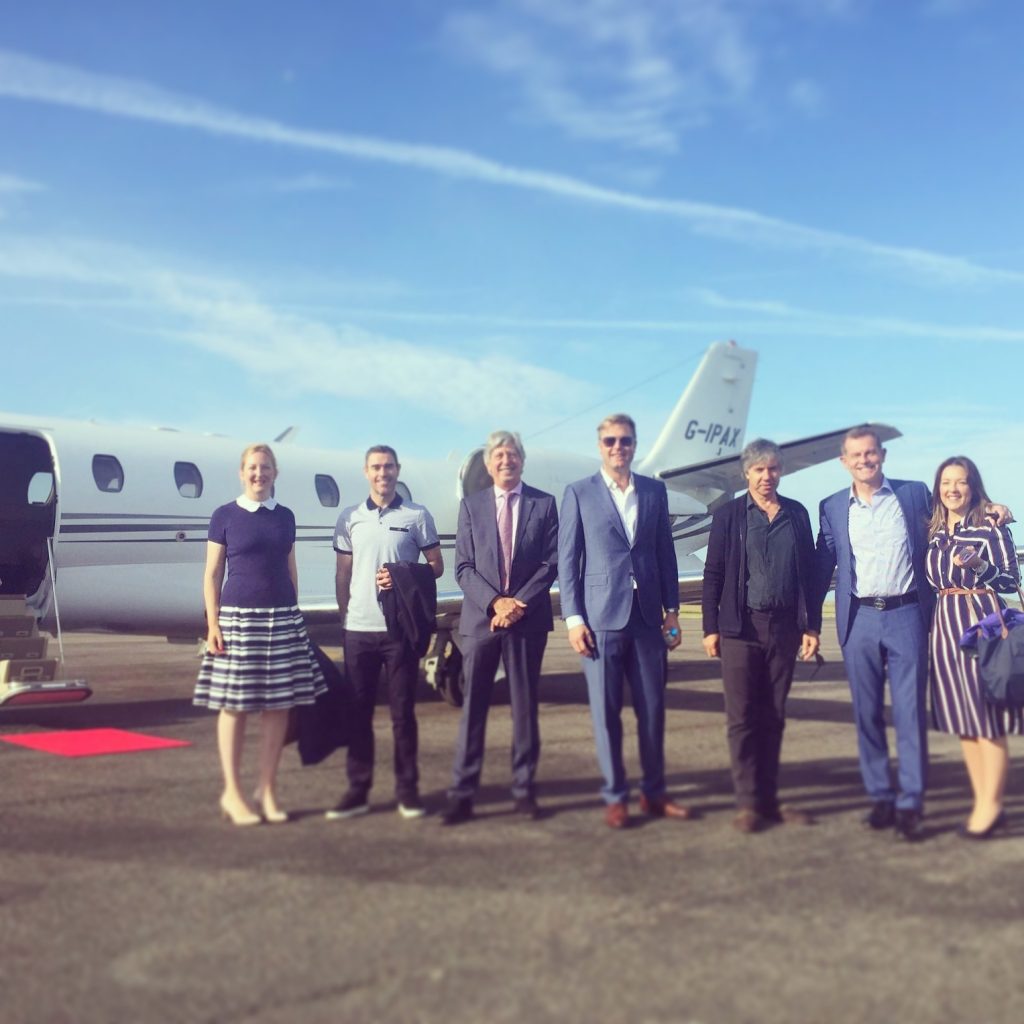 Just another day in the office…

Last week I was invited on a business trip that wasn’t exactly run of the mill. Our client Gabrielle, general manager at high end jeweller Leonard Dews, called me to ask if I would like to take a private jet to Geneva with her and Michael Hyman, the owner, to visit the Patek Philippe Salon and Museum and have a spot of lunch. They had some clients who would like to take a look at some watches at the Patek Philippe salon and would I like to join them?

“They won’t be buying anything on the day”, she explained. “It’s merely for them to see if they would like to consider joining the waiting list for some of the watches where that’s a possibility”.

After debating this invitation for around half a second I accepted with thanks (trying to sound as this if this was the kind of thing I do all the time) and then I got to grips with wondering what to wear, and reading the enormous 300+ page official biography of Patek Philippe to prepare myself for a very unique day.

The immediate question I asked myself was why on earth a successful jeweller like Leonard Dews, established since 1877, who already supplies Patek Philippe watches exclusively to customers in the North West, and has a healthy waiting list for those products, would bother to fly a private jet for their customers to Geneva for lunch to look at watches they are unable to buy?

I soon discovered that the answer lies in the brand genius that is Patek Philippe.

If you haven’t come across Patek Philippe before it is arguably the most cleverly engineered and designed watch brand in the world. Understated and intensely desirable among watch enthusiasts, the brand produces only 65,000 watches a year (with a waiting list that far exceeds this number). It’s not possible to buy direct from Patek Philippe: you have to choose a supplier (such as my client) and stick loyally to that waiting list which is overseen by Patek Philippe, in order to get one. Hopping about between waiting lists is frowned upon.

If you’re wondering why all this is so complicated let me explain further. A Patek Philippe watch has no battery. It is a fully mechanical watch, often requiring no winding, containing a tiny set of complex mechanisms that tell the time despite heat, cold, depth, height, movement or age. Not only that but the complications that Patek Philippe attempts are really quite something. Star charts, moon phases, dates, calendars, time zones and chimes are all build into shiningly perfect watch cases with every element being cut, shaped, polished and assembled by hand, by a huge team of expert watch makers in factories on the shore of Lake Geneva, where the company has been based since its founding by Antoine Norbert de Patek and Adrien Philippe in 1851.

The brand has huge price tags. At around £10,000 for the few quartz-operated watches made, their fully mechanical watches are more expensive, with the entry level for many ranges being in excess of £40,000 and top end products, such as this World Time Complication starting at around £100,000. Their client list is stuffed full of royalty and celebrities, and their waiting list is second to none in the horological world. 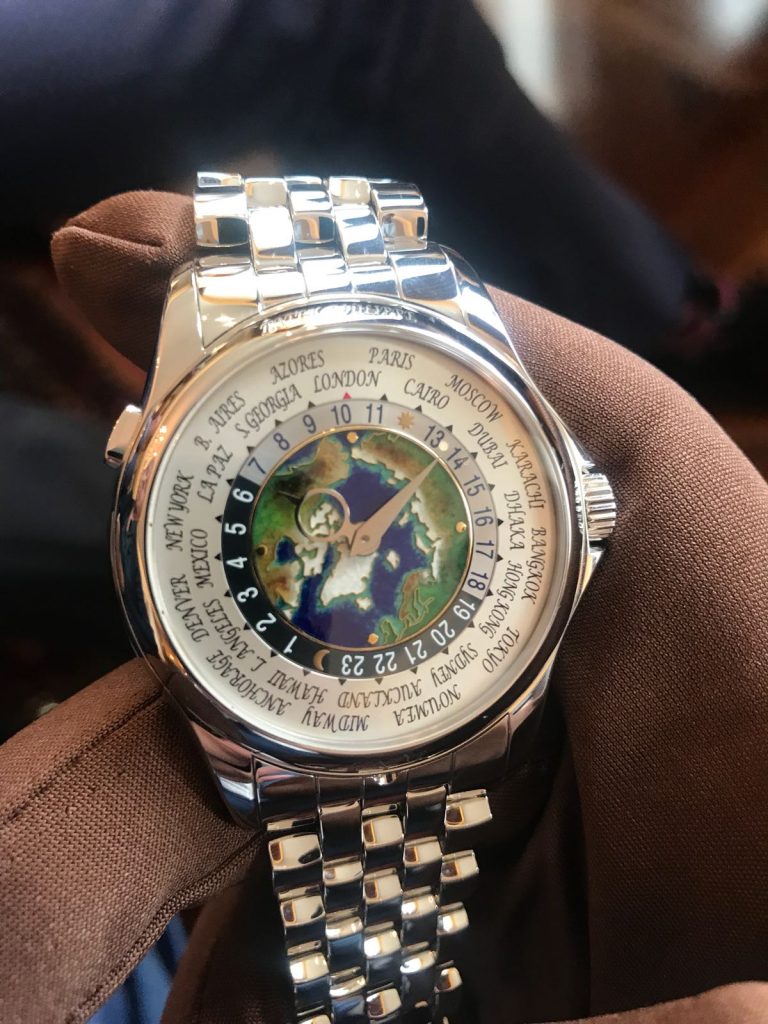 The 5131/1P Complications Self Winding World Time Watch in Platinum by Patek Philippe sells for just shy of £100,000

The price of a Patek Philippe varies depending on what it is that you want to buy – but here’s the rub: price isn’t really the point. It’s the waiting list that matters, and the chance that you’ll be invited to buy a watch is a key part of the success of this global luxury brand.

Thus, high net worth individuals, who are used to getting things that they want pretty much immediately, are forced to wait. This only serves to increase the desirability of the product, and it’s marketing genius.

So, back to the business trip. After a smooth flight on a leather clad jet where we enjoyed canapes, and jolly nice coffee and none of the usual airport horridness, we made our way from a limo to the front steps of the Patek Philippe Salon just off the waterfront at Geneva.

We were ushered solemnly through tasteful (yet impressive) security doors into a beautiful high ceilinged Salon which is where the Patek workshops were originally located back in the day. Security guards stood tastefully (yet beefily) in the corners. Attractive French ladies shimmered past carrying trays of refreshments. Keen and intelligent-looking young chaps in beautiful suits swept about the place carrying trays of watches and wearing the famous brown Patek Philippe gloves which you have to wear to handle one. 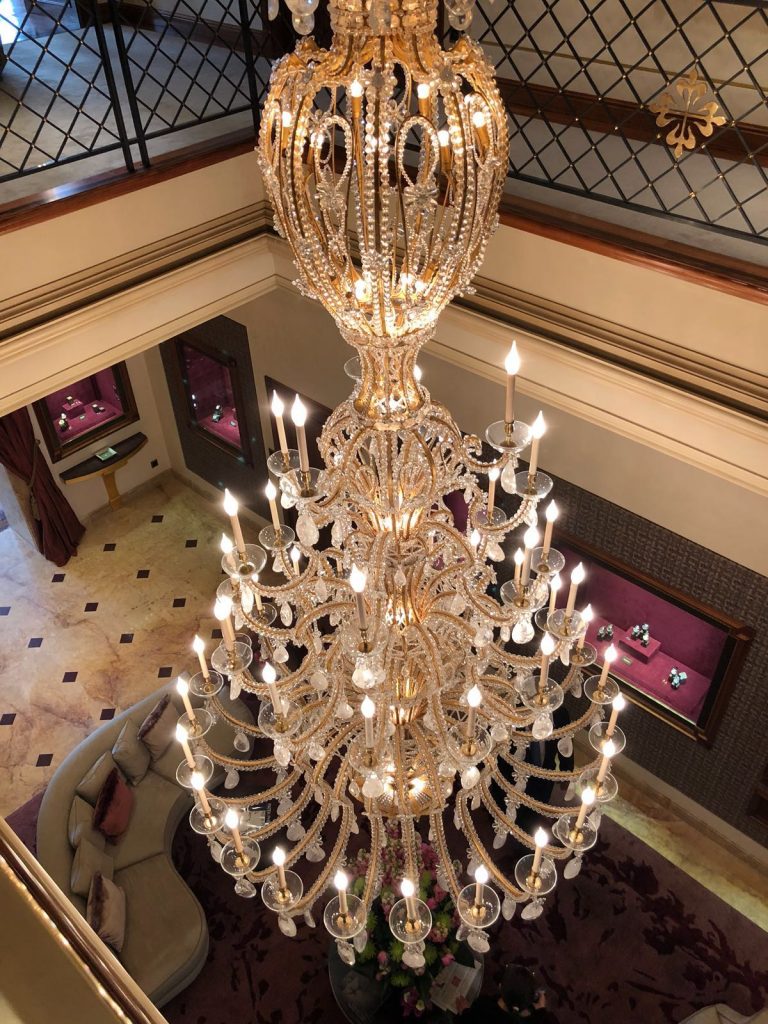 The chandelier at the Patek Philippe Salon 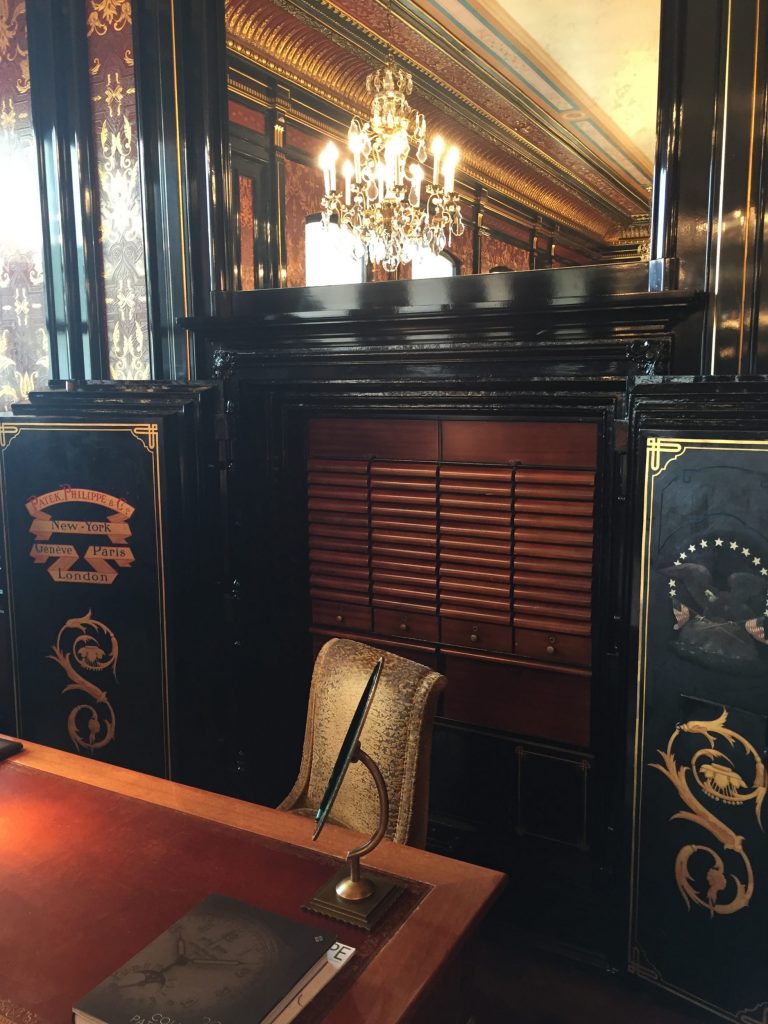 Tiffany and Co safes, bought from Tiffany and Co when they left Geneva in 1876. The warm relationship between Tiffany and Co and Patek Philippe has lasted since 1851 when Norbert de Patek met Charles Lewis Tiffany in New York and they formed a lasting friendship. The opulence of the surroundings is all part of the brand.

I could see the eyes of the customers we were with widening with each watch that passed them. They were truly at the epicentre of the Patek brand and it didn’t disappoint. We were greeted by Patek Philippe’s Salon Manager, Nicholas Clements, whose charm was genuinely awe inspiring. He looked each of us in the eye and warmly welcomed us to the Salon with a sonorous Geneva accent and deep voice that seemed as classy as the watches.

Through arcs of gorgeous flowers and the twinkle of an enormous chandelier, deep carpets and polished floors, we were ushered reverently to see the key sites of the Salon. The original safe. The hand crafted leather wallpaper, the stunning art deco furniture all selected by Mr Stern’s wife. Cases around the walls displayed some of the most legendary watch models, alongside the newest ones just released this year at Baselworld, the annual Mecca of the watch trade.

We were then seated together and one of the Patek Philippe experts from London arrived to take us through some of the models that the customers had requested to see. 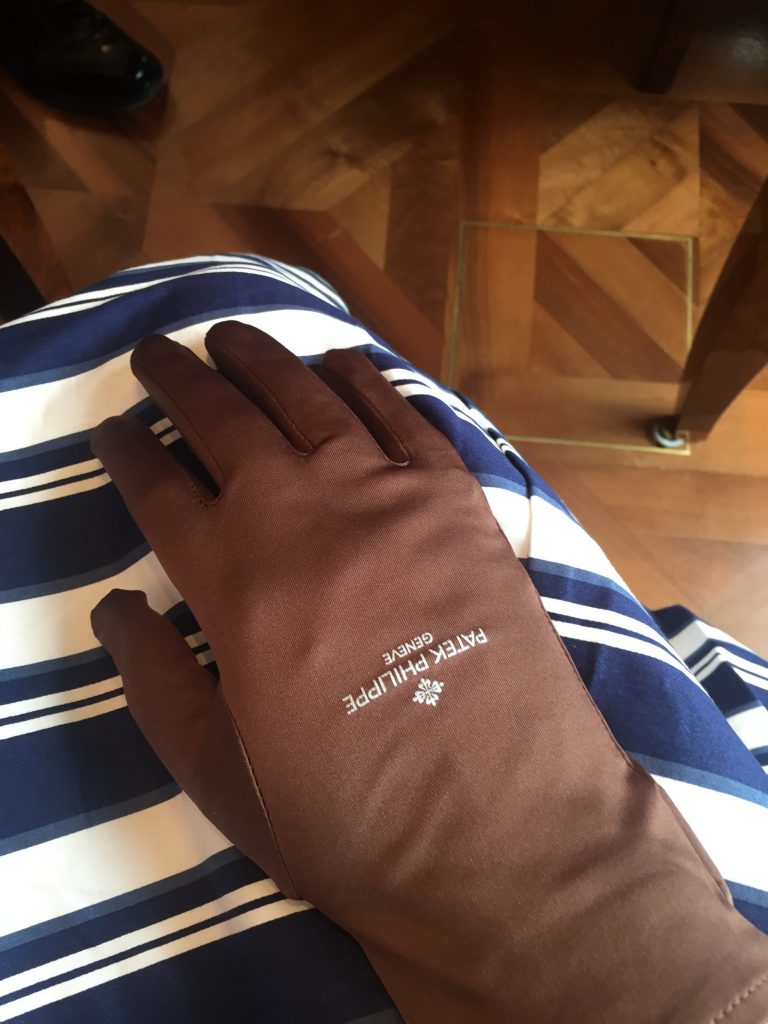 I have to confess at this point that the most technical thing ever to grace my wrist is a fitbit, so seeing trays of similar looking watches initially made me wonder if it was going to be a bit dull, but it was anything but.

The Patek Philippe UK display and training manager, Peter Miller, had an encyclopedic knowledge of every model, and his passion and expertise was staggering. Talking us through each design element and complication I began to understand why these watches inspire such devotion. 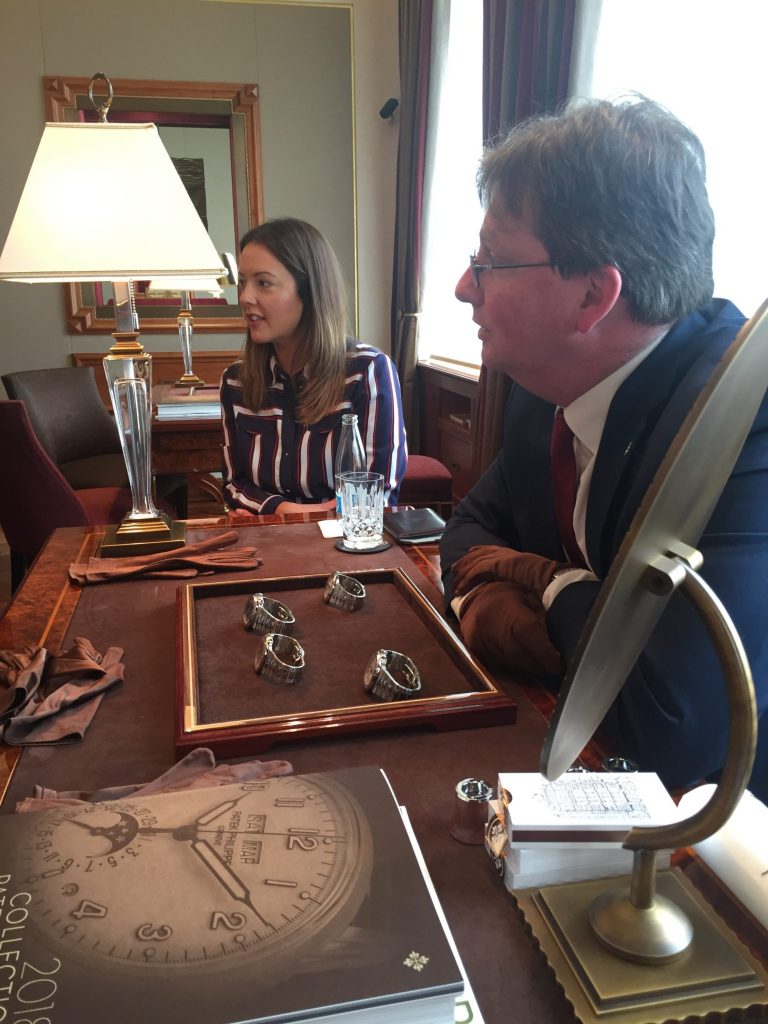 The attention to detail in each timepiece is mind blowing. Thousands of hours are devoted to the creation of every innovation and Patek Philippe doesn’t rest on its laurels. Some of the elements within the watches are slimmer than a human hair, and the sheer number of elements in each watch, each crammed stylishly into a tiny watch case gave me a whole new appreciation of horology. 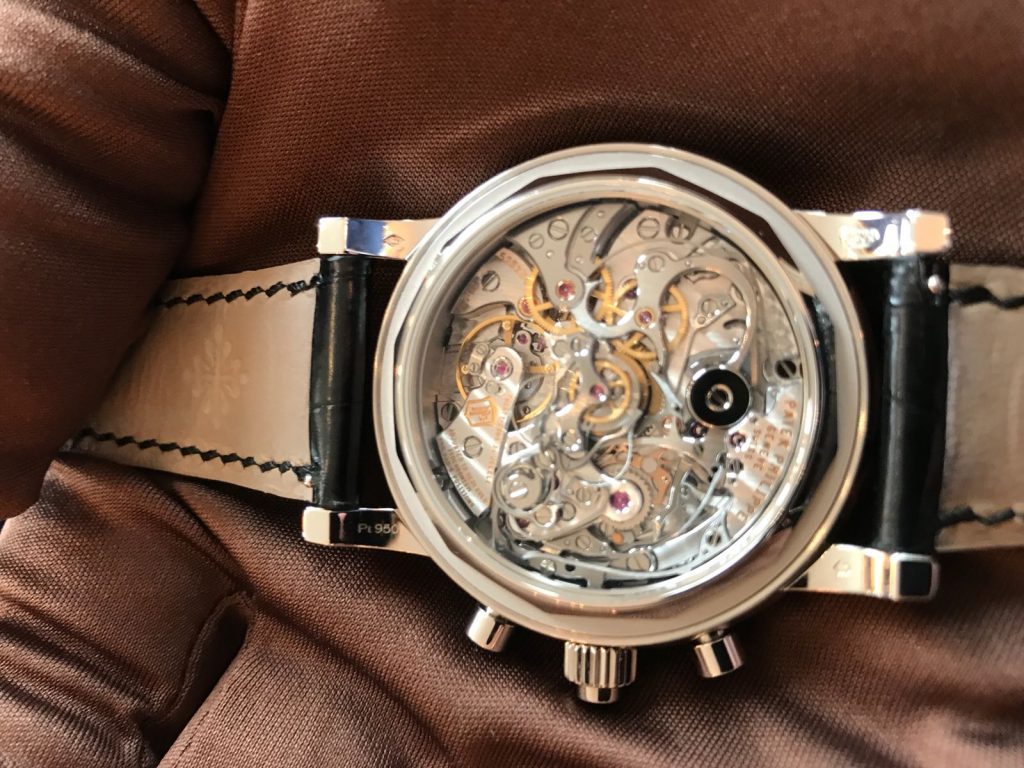 The complexity of each watch is staggering to contemplate

The customers were spellbound and I have to admit that I was too. Each of them went away with whole new wishlists of watches that they were desperate to add to their collections. Whether or not they ever get to buy one is debatable due to the huge waiting lists, but the desire in the room was palpable.

Patek Philippe devotees are an interesting bunch – they tend to be high net worth individuals who have discovered a genuine passion for the way in which these incredible products are made and the family run business, the Patek Philippe museum and the cachet and mystery surrounding the brand only serves to make it more desirable. At the start of my day trip it was fairly easy to scoff at the enthusiasm displayed by the customers I was with, but by the end of it, I had a whole new appreciation for both the products and the brand.

On return to the office I did a bit of digging about previous sales of Patek Philippe watches. One Patek Philippe watch (The Henry Graves Supercomplication) was the most expensive timepiece ever sold at auction, at a cool $24m in 2014. As you may have guessed, the other models also tend to hold their value making them equally tricky to get hold of.

You may have seen Patek Philippe’s brilliant strapline, used over decades which reads “You never really own a Patek Philippe, you merely look after it for the next generation” with the subsequent phrase “Build your own tradition”. This marketing message is recognised throughout the world and perfectly describes their marketing strategy. It’s phenomenally successful and I have to say, pretty brilliant.

If you fancy reading endless fascinating details about Patek Philippe and their watches, their website is a treasure trove of information and can be found at www.patek.com